It's an annual tradition. Every year BoatUS releases their top 10 list of boat names based on people who bought vinyl lettering from them over the previous year. This year's list isn't much different than past years', with many familiar names showing up. Here is the press release from BoatUS about the boat names, along with a photo of one of the boat names on an embroidered shirt from BoatNameGear.com... 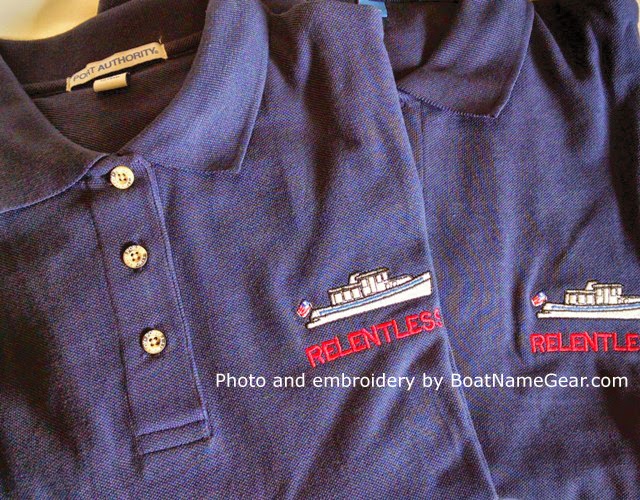 Big and small, power or sail, there are many different kinds of boats and so many different kinds of boat owners. But the one thing they seem to agree on is how boating makes them feel, at least if your looking at a boat’s name on the transom. “Serenity” has been named the #1 boat name for the second year in a row with the release of the 2015 list of Top Ten Boat Names from Boat Owners Association of The United States (BoatUS). It is also the name’s tenth appearance on the popular list of boat names issued annually since 1992 by the recreational boat advocacy, service and safety group. “Calm, peaceful and untroubled is what boating is all about for so many boaters,” said BoatUS spokesman Scott Croft.

The BoatUS 2015 list of Top Ten Boat Names:
Croft says boaters frequently come to BoatUS to get ideas for a name by taking a peek at the Association’s online list of over 8,000 boat names, then use the free and easy layout program to, “Start playing around with a boat name to get an idea of what it will look like, picking letter styles and colors.” Boaters can then choose to either order online or if they want some more creative help, may use the BoatUS Premium Boat Graphics service that offers the talents of a professional designer. An online photo gallery can also help boaters also narrow down a choice.

“Picking a boat name can be harder than naming one’s own child,” said Croft, who has had to name several of his boats through the years. “Boat names can reflect your lifestyle, your relationship to loved ones or what you do for a living. And that’s only the beginning.” For the record, Croft’s first boat name was “Constitution” because, “We happened to name her on a July 4th weekend and I had only a limited choice of ugly hardware store letters.” For his second boat name, Croft chose “Aiden R.” after his only son and used the BoatUS graphics service.  “Kids sometimes think it’s pretty cool to have their name on a boat. It’s also a real safe bet for parent to choose – but only if you have one child,” he said with a smile.