Not a Nauti Dog Anymore

Got this message a couple of weeks ago from a woman who needs help naming her new boat... 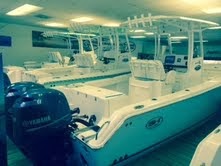 I am retired from civil service, my husband is still working civil service however, is retired navy.  We live on Bennett's Creek in Suffolk, Virginia where we plan to retire. We LOVE our dogs and cat.  The new boat is ice blue.  Our previous boat was named nauti dog.  We prefer something along Ones of animals, dogs, our river, retirement or the amount of money invested in boat.... Love humor! We are soul mates, very happily married!


Got any ideas? Please comment with your boat name suggestions for this happy couple!

While not his first boat, this would be the man's "first boat big enough to bother naming". The boat is a 275 Dorado, a family-friendly coastal fishing vessel, and will be kept in Rhode Island.


The new boat owner asked that we come up with a boat name related to computer software.

First, we looked at the yacht names of some famous technology tycoons to see if we could come up with anything, but most of them had nothing to do with software.

For example, Larry Ellison, founder of Oracle Software (and owner of the America's Cup championship team), owns a very large yacht named Musashi, named after a samurai. Paul Allen, of Microsoft, owns a yacht named "Octopus". Steve Jobs had a boat being built before he passed away, and the yacht's name was "Venus". Even one of the Google co-founders, Larry Page, recently purchased a yacht and named her "Senses".  You see, none of the yacht owning software moguls had boat names that hinted at their profession, so this was going to be a challenge.

We knew that our particular software mogul is hard working, and almost always available via email, and that he valued the time he got to spend fishing in the summer; we also know his company's business software has to do with scheduling computer tasks in a timely manner and sending "alerts" to computer operators and executives when things go wrong. With this, we came up with a few choices for our friend, including:

On Alert  (A pure reference to the software)
Island Time  (Island, as in "Rhode Island")
Outta Time  (A nod to the software, as well as to the license plate from Back to the Future)
Reel Time   (It's fishing time.)
Knot Online  (When do you have time to boat? When you're 'knot' online)
Enterprise (References both enterprise software and Star Trek, obviously)

We're not going to tell you which one he chose, but it was one from the above list. We will tell you that the lettering is not yet on the boat, so feel free to add your suggestion or vote in the comments below...