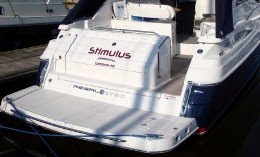 BoatU.S. announced their top 10 list of most popular boat names today, reflecting what their vinyl lettering customers purchased throughout 2009. The top BoatUS boat names this year are not dramatically different from past lists, with “Bail Out” being one of the most notable and clever additions - obviously reflective of the economic times.

Of course, if you're superstitious, boat names that imply bad things happening to your boat – such as "Bail Out" and more notably "On the Rocks" - are probably not for you. Namaste is an interesting addition, but whether the boat owners who bought lettering with that name were referring to Yoga or ABC’s Lost is a mystery.

At least two boat names on the list are surprising as they seem a little dated:

Serenity Now
Are people still naming their boat after a phrase from a sitcom that aired over 12 years ago?

Comfortably Numb
Sure, who doesn't love Pink Floyd, but does a 30 year-old smooth classic rock song really get put on the back of that many boats?

Not a bad list. Ours will come out soon, and I'm interested to see if there is any overlap.

I think the best boat name ever is
"ONE METER SHORT". I saw a couple of boats with this name an its a cruel reality.

I thought the "BABA GUMP" from the movie Forest Gump would be on the list.