I just received a comprehensive message from the White family, looking for boat names that fit their profile. Please read on and post comments below mine. 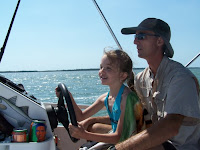 message: Well, we just got a larger boat to fit our family of 7. It's a hurricane (pontoon) boat for our family to enjoy fishing and island exploring on the beautiful West coast of Florida. We need to name our new boat something original and family friendly.

A few details about us to help with a name: 5 kids 7 total family members. White is our last name. My husband is a cop. We are Christians and were thinking of a Bible verse or some other reference to fishing and the disciples. We'd love some suggestions. Thank you so much.

Oh, and we do have a list that the kids came up with. It's down to 4, but we are most definitely open to more suggestions.

Here are the four we have so far:

Shell Finder (shell finding is what the little ones love to do most)
The Great Whites (we were thinking of having 7 sharks next to the name representing the family)
Sandy Cheeks (character from Spongebob Squarepants, of which the kids are huge fans)
Plan Z (plan Z is from an episode on Spongebob)

Well, of the suggestions their family already came up with, I like "The Great Whites" the best. However, I would go with different variations on the theme - since they've got such a great name - and maybe consider White Caps or White Nights.

Anybody with more Sunday Schooling than I've had, please comment below with better boat names. Thanks
Posted on Saturday, May 31, 2008 3 comments:
Email ThisBlogThis!Share to TwitterShare to FacebookShare to Pinterest
Labels: family, religion

A couple of powerboaters who like to fish and have fun on their boat sent the following message in hopes that we can help them name their boat:

There are a ton of good "island" boat names, though many of them are over-used, such as Island Time. In this case, however, I think it's a good fit since they actually live on an island. The subject of this post is the name of a restaurant in Farmington, CT, that I believe is owned by an Irishman and an Italian, hence the name. It is the first thing I thought of when I read this boat name request, so I thought it might spark some ideas.

Reel Island ("reel" as in we really live on an island unlike all those other people who put "island" in their boat name because they wish they lived on an island.)

Hockey season is soooo long, it seems like as soon as somebody wins the cup, they're starting the season again. I guess that's why hockey and boating are so compatible in colder states like Minnesota and Maine. The boating season is as short as the hockey season is long.

Don't blink, you'll miss your chance to boat without wearing a wool cap and coat.

Anyway, I just got this message from a hockey guy who is trying to name his boat. He owns a powerboat, and likes to socialize with other boaters. Maybe you can come up with some better boat names than I did. If so, please click 'comments' below.

Previously recommended to another hockey fan, this one with two boats:
Luxury Box
Slap Shot
Posted on Wednesday, May 28, 2008 2 comments:
Email ThisBlogThis!Share to TwitterShare to FacebookShare to Pinterest
Labels: sports

I just received the following message, and need some boat names from you via the comments below:

Likes to socialize with other boaters: Yes

Posted on Monday, May 19, 2008 No comments:
Email ThisBlogThis!Share to TwitterShare to FacebookShare to Pinterest 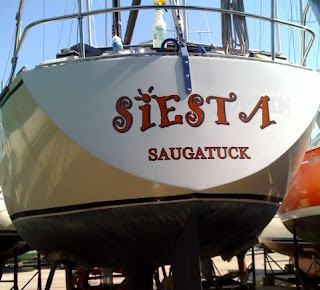 Yay! Another happy Custom Boat Names customer! Dave sent us the photo you see along with the following note:

Here's the recently re-christened Siesta... couldn't be happier with the outcome.

Launch later this week... looking forward to a great summer (and perhaps an occasional afternoon siesta).

Thanks for your help.


Wouldn't you like to be a happy Custom Boat Names customer?

It's easy... Simply visit Custom Boat Names and start designing your boat names now.
Posted on Sunday, May 18, 2008 No comments:
Email ThisBlogThis!Share to TwitterShare to FacebookShare to Pinterest

I just came across an Australian blog where a chap explains how he risked the wrath of Neptune by changing his boat name, but I think he'll get away with it.

He rationalized it because he only shortened his existing boat name, which is more like giving your boat a nick name than actually changing it. Not to risky in my book, but I would probably still do a re-naming ceremony just to be safe.

Since he is changing the boat name to just plain "KAL", I wonder if he'll change the URL and name of his blog, too:
It's called Travels aboard Kalitsah and the URL is:
http://kalitsah.blogspot.com
Posted on Wednesday, May 14, 2008 1 comment:
Email ThisBlogThis!Share to TwitterShare to FacebookShare to Pinterest

May I help you name your boat

This email just came in overnight from Trish and CV May, who are looking for help with boat names. I wonder what the C and V stand for, don't you? I'm not sure, but am sure that these folks sound like they know how to live!

message: I'm a Business Broker, 65 years old, titled the houseboat to the biz, my last name if May, love the beach... in fact live at Atlantic Beach in a development of Charleston-style homes on the beach and ours is red, love Jimmy Buffet, love martini's, love life, have lots of fun, this houseboat looks like a cottage floating on water.

Here are a couple of ideas off the top of my head. Please click "comments" to add your boat name suggestions for the Mays.

May or May Knot
Beach House II
[the web address of your business]
The Office (imagine saying, "let's meet in my office")

Posted on Wednesday, May 14, 2008 3 comments:
Email ThisBlogThis!Share to TwitterShare to FacebookShare to Pinterest
Labels: beach

They need to name boats down under too

This message speaks for itself, and it's good to see the Boat Name Blog is read on the other side of the world. Don't forget, when helping these folks, the boat will be in Australia... so don't suggest any American cliché-type names like Crocodile Dundee or Shrimp on the Barbee.

Hi we live in Brisbane, Queensland, Australia and have just purchased a bowrider. We're a family of 2 adults and 2 girls 10 & 8yrs. Dad can ski, but none of us can and are looking forward to learning. Dad's a Civil Engineer and I'm a Stay @ Home Mum. We enjoy the beach, snow-skiing (go figure!!) not really into fishing but again looking forward to trying now. Girls love music and dancing. Mum and Dad tone deaf! Nobody much in Oz name their boats any more but would love to name ours something clever or funny. Can you help, what can your readers come up with??? Many thanks, oh and love your blog.