I recently got a message from some tug boat owners:

I read that email, googled "american tug 41" to see what one looked like, then came up with the following boat names:

Tug o' War (why not paint it camo?)
Tug o' Peace (in case you're against war)
Tug o' Peas (because it's green)

Here are a couple of "Popeye" names, because when I think of a green Tug, all I can think of is a can of spinach.

Swee 'Pea (again, because it's green)
The Olive (this was the name of Popeye's boat)


Certainly you - my clever web page visitor - could come up with a better name for these folks in Cypress Landing. Please suggest some boat names by way of the comment link below.
Posted on Sunday, September 30, 2007 3 comments:
Email ThisBlogThis!Share to TwitterShare to FacebookShare to Pinterest
Labels: tugs

Mr. Jones and Me

Just this weekend I got a nice email from a Mr. Jones asking me for some boat name advice. My reply is below, but maybe you can post a comment with a better boat name than what I came up with.

Mr. Jones wrote: Just purchased a 28' Sea Ray Weekender. My two granddaughters (Danielle and Kaylyn) and myself (they call me Papa) just can't spend enough time together on the boat. We do weekend excursions and short trips whenever we can work'em in.

All I could come up with were a few "Papa" boat names. Any other suggestions?

I received this message from Juan a few days ago. Can you suggest a boat name for him?

hi, i have searched for a name, but I can't find the right one... I want a name that is funny/sarcastic, as im like that, I bought the boat as to play a joke on a family member, but I really wanted a boat. but it was a last minute deal just before Labor Day weekend, actually i bought it on friday before LB weekend.

Juan, there are a few different ways you can go here. You bought a brand new boat on a whim to get a laugh, which tells me you have a great sense of humor and plenty of disposable income, so you can play on both of those traits in your boat name... something like Funny Money. Joker - Smoker - Toker.

You can also go with the "last minute" or whim aspect of your boat purchase... Out on a Whim...
Add your suggestions as comments please.
Posted on Wednesday, September 26, 2007 1 comment:
Email ThisBlogThis!Share to TwitterShare to FacebookShare to Pinterest

Here are a few of the actual names people purchased in August at CustomBoatNames.com to display on the back or sides of their boat or yacht. I mention yacht names because we recently had some orders of boat lettering that could fit across three boats the size of my 27-footer.

While I'm still not sold on the name Smuttynose for a boat, I think it's a fine name for a beer.

This message from the President of Smuttynose Brewing Co. made me thirsty.
Posted on Thursday, September 20, 2007 No comments:
Email ThisBlogThis!Share to TwitterShare to FacebookShare to Pinterest

I'm mentioning this story in honor of my daughter, who loves princesses. However, being American, and only 4 years old, she has never heard of Princess Anne. 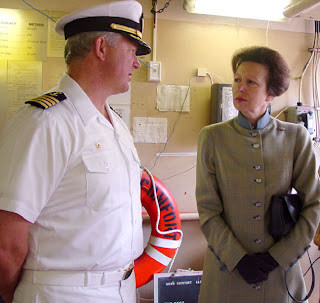 Why do I get to mention Princess Anne on this blog you may ask (if you didn't read the title of the post, that is). Because, according to the Southern Daily Echo, HRH (that's Brit-speak for Her Royal Highness) attended the Southampton Boat Show today. And while HRH was at the show, she christened the new race boat of Southampton round-the-world sailor Mikle Golding. The new boat's name?

I googled this word to see what the heck it meant and all I could come up with was the corporate name of a green detergent company (green as in environmentally friendly).

Turns out, it's true. There is a relationship. Not a bad name if you had to take the name of a sponsor in order to get their money. I could think of worse. Imagine if SPAM sponsored a yacht?
Posted on Monday, September 17, 2007 No comments:
Email ThisBlogThis!Share to TwitterShare to FacebookShare to Pinterest

Smuttynose - I don't think so

I really want to help these nice folks up in Alaska. Any suggestions? Please comment below. Here's their message to me:

"We are in the Coast Guard and live in Alaska. We love Jimmy Buffett, diving, fishing, have a 3 year old named Sean. We just bought an Osprey 24' fisherman that is named Smuttynose---and that just won't do! Help! Please!

Son of a Sailor (better than just naming the boat Sean)

A man after my own heart

Just read this email and started to drool:

"Buying a new 26 foot Sea Ray tomorrow. Need some names. I like cold Corona's, fine cigars, watching football and of course my sexy woman and being on the water."

This is a man's man and some good names instantly popped into my head when I read that message, including:

Carpe Diem
Posted on Thursday, September 06, 2007 No comments:
Email ThisBlogThis!Share to TwitterShare to FacebookShare to Pinterest

Not sure if this guy was really looking for help with a boat name, or just writing to brag. Here's his message in its entirety:

"We are avid fishermen, and do electrical contracting for a living. We also own 7 boats. 27 Boston Whaler"

Well, I'm not here to judge. I'm here to help people name their boats. How 'bout:

Got anything better? Please comment below...
Posted on Tuesday, September 04, 2007 2 comments:
Email ThisBlogThis!Share to TwitterShare to FacebookShare to Pinterest

"We are a family of four, 2 kids ages 1 and 3 and live in seattle,wa. We have a new 37ft sea ray sundancer. We love crusing on the puget sound and Northwest, so a northwest name would be cool. thanks"

My suggestions suck, so please comment to offer some assistance! All I know about the northwest is that they love grunge music, dark coffee and rain (not sure if they like rain, but I think they get a lot of it.)

A realtor who didn't mention she was a realtor, in Atlanta wrote to me:

"We are a family of 5 with a puppy. This is our first boat for our lake house. We love to go tubing and skiing. Our boat is white with black.

Can you help me help Lana and Kurt with their new boat name? Post comments below if you have any suggestions. All I could come up with are:

Puppy Makes Six (Dumb, but to the point)

Toyz (Not sure why this popped into my head)

Somebody sent me an email requesting ideas for a boat name, and this is all they sent me:

"Tommy is a home builder, father of 4 sons."

Not much to go on, but if that phrase inspires you to think of a boat name, please post your ideas here as comments.

Here's what I came up with, I'm sure you can do better: