BoatUS 2017 Top 10 List of Boat Names and Their Meanings


If it's spring, it must be time for the top ten boat name list from BoatUS... We received this press release moments ago: 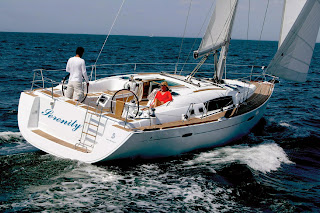 The nation’s largest recreational boating advocacy, services and safety group, Boat Owners Association of The United States (BoatUS), issued its 2017 Top Ten Boat Names list today, a tradition dating back a quarter decade. The names come from tallying up requests for boat names to the BoatUS Graphics service, and each reveal much about the personality of the vessel’s owner.


For more from BoatUS, go to BoatUS.com.

About Boat Owners Association of The United States (BoatUS):

Celebrating over 50 years, BoatUS is the nation’s largest organization of recreational boaters with more than a half-million members. We are the boat owners’ voice on Capitol Hill and fight for their rights. We help ensure a roadside trailer breakdown doesn’t end a boating or fishing trip before it begins. When boats break down on the water, TowBoatUS brings them safely back to the launch ramp or dock, 24/7. The BoatUS Marine Insurance Program gives boat owners affordable, specialized coverage and superior service they need. We help keep boaters safe and our waters clean with assistance from the nonprofit BoatUS Foundation for Boating Safety and Clean Water. Visit BoatUS.com.
Posted on Wednesday, May 17, 2017 No comments:
Email ThisBlogThis!Share to TwitterShare to FacebookShare to Pinterest
Labels: boatus, top boat names

Why not have kids name every boat?

Those are a couple of boat names offered up by 2nd graders who have been tasked with suggesting names for NY's new citywide ferry boats, according to an article on amNewYork.

Personally, I think this is a great idea... if you have a boat to name, and have access to the opinions of kids, why not ask for their advice?

Seriously - have you seen some of the boat names out there that were supposedly named by adults? In many cases, I am confident a 2nd grader could do a better job.
Posted on Wednesday, March 29, 2017 No comments:
Email ThisBlogThis!Share to TwitterShare to FacebookShare to Pinterest
Labels: ferry, kids, new york

Bill Belichick buys a new boat, and it's got a cool name.

Last month, Patriot's coach Bill Belichick pulled off (one of) the greatest championship comebacks of all time, winning Super Bowl 51 in dramatic fashion to say the least. Apparently, one of the first things he did after the victory was purchase a new boat. Smart guy!

With seven Super Bowl titles on his resume (5 as a head coach, and 2 as an assistant), it's no surprise that this seasoned boater used the traditional Roman Numeral style of naming a boat that is not his first, but with a twist.

He didn't put the number after the name... he put it before the name to celebrate all his championships.

According to Barstool Sports, the new boat is named VII Rings.


This is not Belichick's first boat called "Rings". We don't know if he buys a new boat every time he wins a big game. We do know, however, that this past January the Newport Sailing Center announced that Belichick had donated a 24' Grady White, named "V Rings", to their non-profit public sailing center in Newport, Rhode Island.

Hey Bill! This fledgling New England-based blog would be more than happy to accept any other old boats you have laying around. Please contact the editor for consideration.

Boat Names at the Boat Show

Here's what they came up with...

Our personal favorites from the list are # 8, and #11. For the full story, complete with photos of each boat, check out 11 Best Boat Names At This Year's Fort Lauderdale International Boat Show.